Existential Game Design – Lost in the Woods, Searching for Bliss

Our next speaker is the wonderful Doris Rusch (@D_Carmen) talking about Existential Game Design (https://t.co/zcd8h8LlbT) #ggconf18

Throughout the history of humankind, myths have served the purpose of connecting us with our deeper selves, with a sense of who we want to be and how we might get there. Their themes have been derived from the ultimate concerns that constitute the human condition: the fact that life is ultimately limited, has no inherent meaning, yet we need to choose our path, figure out who we are , where we fit, and how we relate.

Joseph Campbell wrote: “Mythologies present games to play: how to make believe you’re doing thus and so. Ultimately through the game, you experience that positive thing which is the experience of being-in-being, of living meaningfully.”

The old myths have lost their popularity in society, yet we still die, we still struggle with our identities, with isolation and purpose. But now, we have videogames and a chance to re-envision myth in new, contemporary ways. The question, though, is how?

This talk explores potentials and pitfalls of designing games that allow players to ponder existential questions, promote self-reflection, insight and emotionally transformational experiences. It discusses the connections between play personalities and finding one’s purpose, intrinsic vs. extrinsic motivation, and the fine line we have to walk as game designers between providing playful frameworks of self-inquiry for players while not focusing their attention outwards, towards the game structure and its quantifiable outcomes.

Drawing on existential philosophy, mythology, learning sciences, and play research, this talk proposes tentative guidelines for designers who want to bring myth to the 21st century and to its most culturally relevant medium: videogames. 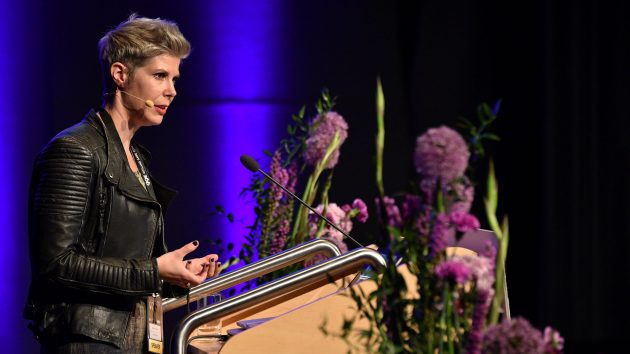 About the Doris Rusch:

Doris C. Rusch is a game designer, researcher, play aficionado and holds a position as associate professor at DePaul University where she founded the Deep Games Laboratory. Before that she did post doctoral work at GAMBIT Game Lab, MIT, and Vienna University of Technology (Austria).

Rusch’s work is focused on the theory and practice of game design, particularly in regard to games that model the “human experience” and focus on mental health issues. She was the lead designer and vision holder of award winning and featured projects such as Zombie Yoga for Kinect, Elude, a metaphorical game on depression, For the Records, an interactive documentary that deals with young adults and mental disorders such as OCD, ADD, eating disorder and bipolar disorder and Soteria – Dreams as Currency, a game to teach strategies to overcome anxiety disorders. Her reflective practice and game design research also manifested in the book Making Deep Games – Designing Games with Meaning and Purpose (Taylor & Francis 2017).

Her games have won numerous International Serious Play awards and have been showcased at eclectic festivals such as IndieCade and Tokyo Game Show. She has been a keynote speaker and presenter at venues including Clash of Realities, DiGRA, Game Developers Conference, Meaningful Play, Nordic Game Conference, FDG, TEDx and the Gotland Game Conference.

Having completed studies in Literature, Philosophy, Comparative Media Studies and English at Vienna University, she received her Ph.D. in Applied Linguistics and Interactive Systems.